Harvard is a kinetic, highly musical presence as the primary Tommy — and the way this version of Pete Townshend’s rock opera works, you sometimes see as many as four of the traumatized kid at once. Among the multiple Tommys — different ages, different communication methods, sometimes regarding each other from both sides of the story’s conceit of a mirror — Harvard dominates the second act as the older Tommy. He delivers songs in impassioned ASL while dancing and working in sync with Will Hayes, who sings the part in a vulnerable tenor. Younger Tommys are played by Chloe and Kira Mitchiner, and if director Suzanne Richard’s stage is often crowded, it’s never confusing.

2007  Songs for a New World
directed by Suzanne Richard 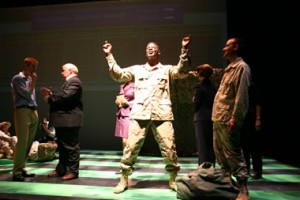 One thing not to miss: Watch, when Brown assembles a series of expansive chords at the end of a big number, how sign master Monique Holt and choreographers Shula Strassfeld and Peter DiMuro stagger and stack the ensemble’s gestures in a visual echo of the music’s build—it’s thrilling, and it makes you think about how many channels of communication we take for granted, and how many we usually overlook. Turns out a show driven by the idea of possibilities—of openings to new worlds—was a very fine choice indeed. 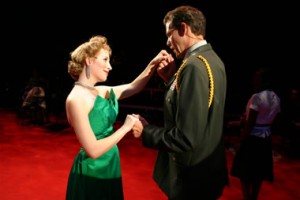 “In creating little collisions of expectation and possibility, the troupe finds expressive, often exciting modes of communication that are less about limits overcome than about boundaries shattered—taking vocabularies or styles or images that wouldn’t exist but for those limits and those boundaries, fusing them with theatrical techniques both traditional and experimental, creating something that, at its best, is vital and energizing and new.” 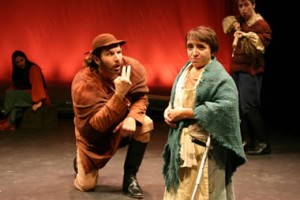 “ Open Circle comes at the play with an inventive fusion of sign language, spoken dialogue, singing, and dance, with a healthy mix of actors who can fling themselves headlong into a wheelbarrow and others who need to stash their crutches somewhere before they can flee pursuing soldiers across a bridge thrown up by castmates’ backs. .., Open Circle scales the sharp-peaked mountain of a play with no little panache.” 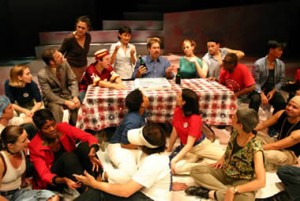 “Director Suzanne Richard found a way, without altering a word or a note, to give a freshness to this piece, make it surprisingly relevant to the moment, and, in the process, reveal the rock solid dramatic structure that underlies Rice’s script….. They do it all with a staging that, due to Open Circle’s approach of utilizing the abilities of artists with disabilities, is both unique and tremendously satisfying.” 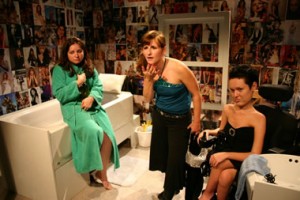 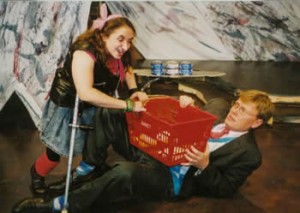 “Suzanne Richard’s performance was executed with stunning intensity. Watching Richard…it becomes clear that an actor with a visible disability is sometimes able to add depth to a role: vulnerability, strength or, in some cases, even a slight edge of discomfort for the audience that heightens the excitement of the performance.”

“View the Visible Language performance at the Kennedy Center online! 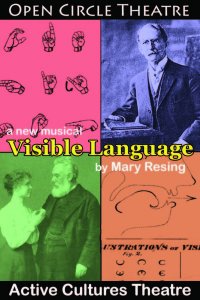 Join Us
for a performance of the music from
VISIBLE LANGUAGE
a musical about the battle for control of deaf communication.

Be part of the creative process!

Monday, August 3rd at 6pm
on the Millennium Stage at

Performance was simulcast at
www.kennedy-center.org/programs/millennium/ 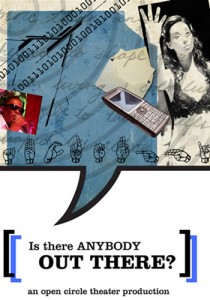 OPEN CIRCLE THEATRE PARTICIPATED IN
THE CAPITAL FRINGE FESTIVAL WITH A NEW CABARET:
Is there ANYBODY OUT THERE?