A Letter from the Chair:

The Artistic Advisory Council strives to elevate the visibility and reach of Open Circle Theatre. Through the vital power of collective storytelling, we continue to shape the field of theatre and our larger society. We believe in open-hearted, accessible, inter-sectional theatre practice that engages and enacts diverse perspectives and lived experiences. We are working together to create a better future during this moment of challenge and change by fostering more accessible community for all’.

Artistic Advisory Council members serve as mentors and models of artistic excellence, as well as advocates for artists and for the artistic process. We support and promote accessible, integrated and inter-sectional theatre. We provide guidance and expertise on areas of import to the company (e.g., play selection, outreach efforts, and the mentoring of young actors).

In our changing and challenging times, we recognize the need, and confirm our desire, to preserve strong core values and yet be responsive, adaptive, and ever-growing and evolving.

The Council meets twice each year to share stories from the field, our diverse perspectives and lived experiences; to revisit, realign/reinvent, and reinvigorate OCT’s goals and aspirations. Members also make themselves available from time to time throughout the year to join a brainstorm, a classroom, and/or a rehearsal room; to provide a sounding board and sound advice.

I am honored to serve as the inaugural chair of the Artistic Advisory Council.

I know the artists here. I know they possess the highest level of integrity and excellence on and off the stage. They are my favorite combination of instigator and fellow – individual and collaborator. But, most importantly, for me, they always care about the good of the “whole show” as well as their “part.”

If you are interested in joining OCT’s Artistic Advisory Council, please send an email with a brief bio to advisorycouncil@opencirclethatre.org. I look forward to connecting with you.

Susan Lynskey is an award-winning actor and educator with a long history of commitment to and collaboration with the d/Deaf and disability communities. She has served as an Advisor to the National Disability Task Force for Theatre in Higher Education; as an Englehart Fellow for Diversity, Equity and Inclusion; a Doyle Fellow for Teaching, Learning, and Innovation; and a Master Teaching Artist/Trainer for NAEP (National Assessment for Educational Progress). She came of professional actor-age in the Deaf community in DC, working first as a Voice Artist and then as Director of Voice for ASL productions at Gallaudet University; she authored and taught Deaf Performance Culture courses at Georgetown University, fostered the inaugural cross-Campus performance exchange, forwarded the Disability Studies Major there and secured the placement of ASL in the curriculum for the first time in GU’s 231-year history. Lynskey serves as a Master Teaching Artist for Ford’s Theater/Deaf-West and is on the Artistic Advisory Board of Sign Performing Artists. She guides autism/sensory-friendly performances as a consultant for The Kennedy Center’s Theatre for Young Audiences and Imagination Stage. She directed and devised VISIBLE IMPACT, a work that explores and enacts diverse experiences and perspectives from the d/Deaf and disabled communities. She is honored to serve as the inaugural chair of Open Circle’s Artistic Advisory Council.

Pranjal Varma is a graphic designer. He got into this line of business in 2020 when he first started helping Open Circle Theatre with their website. Pranjal is passionate about being a graphic designer & doing the creative work on websites. By age 15, he had already started learning to make websites for small clients. He now has a diploma and advanced courses in animation, using Adobe Premiere and After Effects and looks forward to adding more exciting features to websites. Pranjal lives and works in Rockville Maryland and looks forward to building a professional studio here in the near future. 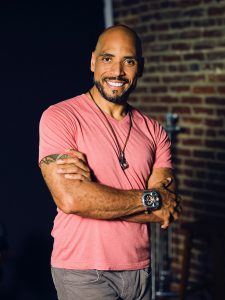 Michael J. Bobbitt is the Artistic Director of New Repertory Theatre in Boston, MA.  He is an arts leader, director, choreographer, playwright and Anti-racist Arts Advocate.

Michael has been a leading voice for Inclusiveness in the arts beginning early in his career in his hometown of Washington, DC, and throughout his tenure at numerous prominent arts organizations, where he has been repeatedly recognized for his efforts in the advancement of Anti-racism, Equity, and Diversity. His practices, policies and procedures for creating and changing culture within arts organizations have been adopted by several organizations around the nation. His thought-leadership in this crucial area is now spreading to a number of national outlets including regional panels, national conferences, and his widely popular new series of webinars focused on building Anti-racist organizations.

In his first year at New Rep, Michael eradicated the debt, built three several months of reserves, increased ticket sales by 43%, donations by 24%, patronage by 26% and Board giving exceeded goal by 57%.  Additionally, he has made New Rep into a leading voice on building Anti-racist theatre.

Prior to New Rep, he served as Artistic Director for Adventure Theatre-MTC in Maryland, where he led the historic organization to be one of the leading theatre/training companies in the DC region and a nationally influential professional Theatre for Young Audiences.  He led the company through a merger, that increased the organizational budget by more than 600%, and led directly to an expansion of the audience base by over 400%. During his tenure, he commissioned 40 new works by noted playwrights, transferred two shows to successful Off-Broadway run in NYC, and oversaw the launch of an international tour that brought worldwide attention to Adventure Theatre-MTC. Michael founded and built a performing arts training academy for school-aged students in the Washington, DC area that became an important resource for young artists in a region where public school arts programs had been sacrificed in the name of cost-cutting. His productions received dozens of Helen Hayes Award© Nominations and featured eight wins.

As a writer, his work has been produced all over the country and international.  He has plays published by Concord Theatricals, Plays for Young Audiences and Broadway Licensing.  He trained at Harvard Business School’s Strategic Perspectives in Nonprofit Management, The National Arts Strategies Chief Executive Program, Professional Fundraising Certificate Program from Boston University, Certificate in Diversity and Inclusion from Cornell, art-equity and People’s Institute for Survival and Beyond, and other top leadership programs. He earned the Excel Leadership Award (Center for Nonprofit Advancement) the Emerging Leader Award (County Executive’s Excellence in the Arts and Humanities), and Person of the Year Award (Maryland Theatre Guide), among others.

Rick Foucheux is a long-time and active member of the vibrant Washington, DC theatre community.  Over a thirty-five year career he has appeared at most of the area’s fine theatres and has played a variety of parts from classical to premiere works.  Among his many roles were Willy Loman in Death of a Salesman at Arena Stage, Tevye in Fiddler on the Roof at the Olney Theatre, Big Daddy in Cat on a Hot Tin Roof at Roundhouse Theatre, and Lear in King Lear at WSC/Avant Bard.  He is a member of the acting company at Woolly Mammoth Theatre.  Mr. Foucheux has received five Helen Hayes Awards and numerous nominations, including for his role as Pontius Pilate in the 2004 Open Circle Theatre production of Jesus Christ Superstar, directed by Suzanne Richard.  In 2017, he received the Richard Bauer Lifetime Achievement Award from the Washington Area Performing Arts Archive, WAPAVA.  As a teacher he has served on the faculty at George Washington University and the Theatre Lab, and he has coached and mentored many.  Mr. Foucheux is a Lunt-Fontanne Fellow of the Ten Chimneys Foundation. 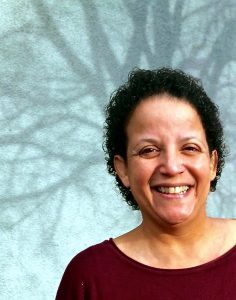 Ayisha Knight-Shaw is a California based Deaf multimedia artist, poet, educator, Reiki Master Teacher, and ASL theater consultant who is thrilled to be part of the Artistic Advisory Council.  The daughter of a White Jewish mother and Black Cherokee father, she was raised by her mother in an ethnically diverse community of poets, painters, sculptors, photographers and storytellers who taught her that creating and sharing art is as much a political act as a thing of beauty. Over the years, her passion for art, storytelling, theater, Reiki and education has been forming a tapestry that continues today.  If you would like to see more of her work or would like to know more, you can visit www.deafayisha.com or contact deafayisha@gmail.com.

Justin Schmitz is a Washington D.C. based Sound Designer and Theatre Artist. His work has been featured in: The Kennedy Center for the Performing Arts, Kennedy Center’s Theatre for Young Audiences, Signature Theatre, Round House, Woolly Mammoth, Theater J, Studio Theatre, Forum Theater, Theatre Alliance, Olney, Imagination Stage, Constellation Theatre, Rorschach Theatre, WSC Avant Bard, Gallaudet University, University of Maryland, Catholic University of America. Regionally: Dixon Place Theater, Chautauqua Theatre Company, St.Louis Black Rep, Triad Stage, Actors Guild of Parkersburg, and The University of Wisconsin-LaCrosse, amongst others. Justin is a member of I.A.T.S.E. United Scenic Artists Local USA 829; the Theatrical Sound Designers, Composers Association (TSDCA); and USITT’s Professional Membership. He received Fellowships from Chautauqua Theatre Company in 2013, The Kennedy Center in 2011 to attend The Orchard Project, and to work with Theater J in 2015-2016. He has been nominated twice for Helen Hayes Awards including: I Call My Brothers (Forum Theater), and The Wild Party (Constellation Theatre). He is a Region 3 KCACTF winner (2011) for Sound Design and national finalist for his work on Sarah Ruhl’s Eurydice. He has four Certificates of Merit for Sound from the Kennedy Center: Eurydice, The Diary of Anne Frank, A Midsummer Night’s Dream, and Into The Woods; and a Certificate of Merit for Stage Management: Dirty Rotten Scoundrels. 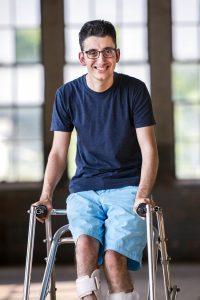 Ryan J. Haddad is an actor, playwright and autobiographical performer based in New York. His acclaimed solo play Hi, Are You Single? was presented in The Public Theater’s Under the Radar Festival and continues to tour the country. Other NY credits include My Straighties (Ars Nova/ANT Fest), Noor and Hadi Go to Hogwarts (Theater Breaking Through Barriers), and the cabaret Falling for Make Believe (Joe’s Pub). Regional: The Maids, Lucy Thurber’s Orpheus in the Berkshires (Williamstown Theatre Festival), and Hi, Are You Single? (Guthrie/ Cleveland Play House/ Williamstown). TV credits: “Bull,” “Madam Secretary,” and “Unbreakable Kimmy Schmidt.” Haddad has performed original work at La MaMa E.T.C., the New Museum and The LGBT Center of NYC. His plays in development include Good Time Charlie and Dark Disabled Stories. He is a member of The Public Theater’s Emerging Writers Group and a former Queer|Art Performance and Playwriting Fellow under the mentorship of Moe Angelos. www.ryanjhaddad.com / @ryanjhaddad. 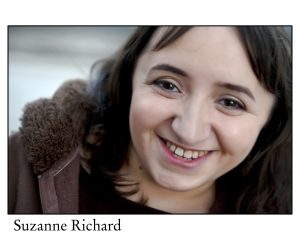 Suzanne Richard is the Artistic Director of Open Circle and has a BA in Dramatic Arts from the University of North Carolina at Chapel Hill. With Open Circle Theatre, she received a Helen Hayes nomination for Outstanding Direction and Outstanding Production of a Resident Musical for Jesus Christ Superstar.  She currently works as a professional actress in the DC area with companies such as The Folger, Ford’s Theatre, Washington Shakespeare Company, Imagination Stage, and 1st Stage. She also works as a consultant to the U.S. International Council on Disabilities, where she was previously the Outreach Coordinator.